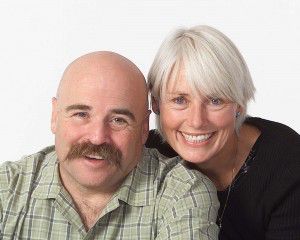 Kelly was born in Canada but raised in southwest Los Angeles. He grew up in a conservatively Jewish home. Both his parents were committed Jews, and are now deceased.

After 8 years of Hebrew school and finally doing his bar mitzvah at age thirteen, Kelly left the Jewish tradition. Having a difficult time as a teenager, he was always in trouble with the law and drugs. Finally Kelly was confronted with the decision to either pursue the course of his rebellious ways or to straighten up. Fortunately Kelly did a complete turnaround, applying himself to school and athletics.

Kelly met Kathy while attending a community college in 1970, and they were married on October 2, 1976.

After graduate school, Kelly and Kathy moved to Montana, via Idaho, to start their family. Kelly had a CPA corporation in Montana, while also doing some teaching at a local college. In addition, he was part of a financial team that advised the state governor.

Soon after being married, Kelly and Kathy began attending a local church in their small town in northern Idaho. Kelly felt that going to church was a wholesome part of his new life as a husband/father. But soon after he began to attend church, he met a local logger who shared the Gospel with him. Kelly was cautious, but interested. Within a few months Kelly broke before the Lord and accepted Jesus as his Savior, and committed himself to following Christ.

It was a couple of years later that Kelly actually realized that Jesus was his “Lord” (and not simply a servant). As a result, Kelly began to commit all that he had to the Lord and His purposes.

Kelly was always excited about sharing his faith with others.  He also loved his lifestyle in northwestern Montana. As the Holy Spirit began to show Kelly His heart for the lost, both Kelly and Kathy began to pray for those who were unsaved. He had nightmares about the multitudes who were going to a Christ less eternity without the opportunity to be saved. Whenever Kelly prayed, he unconsciously gravitated toward praying for the lost. And whenever he read his Bible, Kelly kept hearing the call to missions.

Finally in the mid-80s, Kelly realized that he and his family were called to reach the lost, where the Gospel wasn’t being preached.

After being turned down by 52 mission organizations, Kelly decided to follow God’s call to reach the unreached, without a mission organization. The call was confirmed by Kathy.  Even though they loved their lifestyle in northwestern Montana, Kelly and his family moved to the Republic of Transkei where he committed his life to reaching the unreached among the Xhosa tribe.

Kathy was born in Santa Barbara, California on September 28 into a Presbyterian family. At a very early age her family moved to Westchester, California (just west of Los Angeles). She was the oldest of six children. Both her parents were teachers.

Even though church was an integral part of her family, she never actually understood the Gospel, and that she could have a personal relationship with Jesus. But she loved the church and being a part of church life.

Soon after high school she met Kelly through her best friend. They began dating and seven years later were married.

After attending a community college in Southern California, she was accepted to a new school called Point Loma Nazarene University, where she earned her Bachelor of Science degree in Nursing.  Soon thereafter she became a registered nurse.

When Kelly finished at UCLA, they moved to Montana (via Idaho), where she became the Public Heath Nurse for Lincoln County, Montana. But with two infants at home she abandoned her career as a nurse, focusing her energy on family and homeschooling the children.

As Kelly and Kathy began to read the Bible and learn more about God’s plan of salvation in 1979, Kathy made a decision to accept Jesus as her Lord and Savior. As she grew in her love and understanding of Jesus, she began to share His heart with those who were lost and unexposed to the gospel. As a result of God’s call, Kathy and Kelly shared a vision to use their lives to serve the Lord by reaching the lost of this world. In the mid-80s Kathy and Kelly left their comfortable lifestyle in the Rocky Mountains of Montana and ventured to the Republic of Transkei to reach the unreached among the Xhosa tribe.