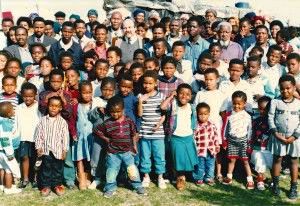 After several years of working in remote tribal villages, it became obvious  there was an absence of men. The newly planted churches were primarily women, as there were few men in the Transkei villages. In a male dominated culture, it was important to reach the men.

The Xhosa young men would travel to the cities to work in the factories or in the mines, in order to earn enough money to return to the Transkei to buy a wife.  But after obtaining a job and becoming consumers, the men were reluctant to return to their homelands. They remained in the ‘black townships’ of South Africa and would annually visit their homeland (and their wives). When the men visited their families and their villages they would view church as a women’s activity. During their times in their village they would choose to drink rather than go to church.

Over the last couple of decades, ANLM has planted many churches throughout the cities and townships of southern Africa. The main mission center for ANLM is located in Msobomvu. In addition to reaching the western amaXhosa, they have now begun to establish churches in the rural (not remote) areas of the Transkei.